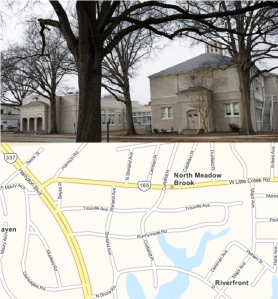 The City of Norfolk solicited requests for proposals for the site of Meadowbrook Elementary School without contacting or consulting the Meadowbrook Civic League, which might have provided helpful input on parameters for future redevelopment.  The city received three development proposals, none of which meet the criteria outlined in the civic league’s position statement, primarily due to the residential density of the proposals, and lack of enough green space being maintained. A public forum was finally held on February 19th after inquiries and disappointment was expressed by the Meadowbrook Civic League.  The smallest of the three proposals will result in 22 single-family homes, the largest specifies up to 90 apartment units.

The former Meadowbrook School, shuttered in 2009, is on Preservation Virginia’s 2011 list of Most Endangered Historic Sites in Virginia

You can review the proposed concepts, see the developers’ pitches, and provide input for the development of the site at THIS LINK

This is a great Virginian Pilot article with all the background, and Meadowbrook residents’ frustrations: “Residents say Norfolk kept them in the dark”    (Stephen M. Katz photo, The Virginian Pilot-above)

♦ League General Meetings are held on the 2nd Monday of each month, at Suburban Park Elementary School unless otherwise noted.
♦ Meetings start at 6:30pm and end at 8:00pm, with doors open at 6pm for refreshments.
♦ See the Suburban Newsletter for additional details.